The purpose of maintaining ancient lore and culture intact ensures survival in times of great challenge…..to change ancestral lore can cause extinction.

“Giraween, Boonoo Boonoo  is one of the most important ancestral meeting places of the Origine’ peoples of Australia…..it is  where all the old tribal clans of the northern Yoocum Yoocum would gather for trade, ceremony, initiation, corroboree and marriages…it’s on the way up to Bonyi Bonyi the Bunya Mountains  where they would attend the triannual Bunya Nut and Moth harvest in the ancestral estate of the Wakka Wakka moiety……Kambuwal, Jukambal, Ngarakbul, Githabul, Kwiambal…..all the bird tribes would attend,  traveling on the ancient songlines ”….

“I would like to share with a very very old Bootheram will tells of the creation from a time when the 5 coastal volcanoes were geologically linked together to form a much larger volcano which for the Yoocum Yoocum is a prehistoric mountain belonging to our creator Nguthungulli – our Father – God”……..

“There is a creek up on the Maleny Volcano Plateau which still bears the name of Nguthungulli’s sacred mountain – Oobi Oobi creek which meanders across the mesa and through the mountain villages … it is connected to the main headwaters – through aquifers which still unify the 5 volcanoes”…..

“Githabul country is the headwaters of the major east coast rivers….and just out of the village of Woodenbong , there is a sacred waterhole – the Githabul playfully call it the rabbit-hole, but it is the junction of major tributaries and underground aquifers which shoot water into these ancient volcanoes ‘like a pump’ ……its sacred to the women’s Rainbow Serpent water lore and far to sacred to swim in”….

‘Giraweenga’ is the name for the White Sulphur Crested Cockatoo ….a very important bird to our Creation Lore and the kinship Skinlore of the moieties  which unites us.. we are the bird tribes of Australia and we come from the eye of the Emu”….

The first bird, who flew from the Bunya Mountains, from the Wakka Wakka ancestral estate was a white cockatoo named Kirra …the flight he took goes all the way down four volcanos to Coolangatta….there is a mountain lookout, right on the beach at Coolangatta called Kirra…..that cockatoo is a very very old bird – a flying dinosaur”…..

“The ancient knowledge of the geological creation further illustrates just how old the Origine’ people are …and just how much they know…….. not only about the creation of the landscape…..but also about  significant celestial cycles which trigger earths climatic changes……and about the  indelible link of natural lore to time and space –  to the stars…..and to water…….the word for the Milkyway is Balun which is also the word for river ….’Balun’, river in the sky”…..

“All  Bootheram lore is written across the vault of the Milkyway and can be read like a book by the initiated…this way it can never be changed…as no-one can change the stars”….

“ Lena Wheatley was from Girraween and she married Hughie Williams ……They had twelve children, six boys and six girls –  Githabul Elder Euston Williams was one of the twelve …..Girraween marrying Githabul is a proper tribal skinlore marriage….in accordance with men’s marriage triangulation in the Starlore cycles”….. 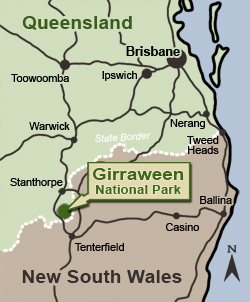 “I would like to share this important Giraween Bootheram with you…..it is a very very old Bootheram…… a Bird Tribe Bootheram called Budharbihyn Boodjeram …..or the Bootheram of the Flowers ……it is about the resurrection of the ancient lore at a time of earth upheaval. ”….

“ After Nguthungulli, the god of creation, had left the earth and gone to his sacred crystal mountain, Oobi Oobi, the flowers, which the Githabul call ’budharbihyn’, all withered and died…… nothing grew in their place………. The earth was bare and desolate and soon the ’budharbihyn’   became merely a legend which the old people passed on to the young ones”……. 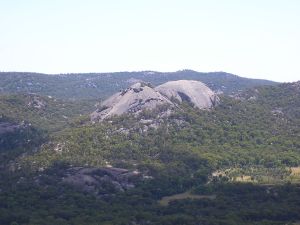 “When the flowers, the ’budharbihyn’, went, so too did the bees – ‘juluhngay’….a great sadness filled the earth…..dark  clouds gathered and it began to rain and rain and rain”

“The women would take out their bark dishes to fill with honey, but they always returned with them empty…. there were bees still living and working on earth but only in the three sacred trees which Nguthungulli had claimed as his own, and the people did not dare go near these for fear of [further] punishment ”………

“Those three sacred trees held up the sky way back in the dreamtime when the bird tribes had only just begun…great change had blocked out the sun and no blue sky could be seen, only cloud….. held up by the soaring branches of those three ancient tree’s…….now all that’s left of them is their stumps , and those metaphorical ‘stumps’ are three very sacred volcanic mountain plugs ”…..

“The ‘jarjum’, the children, cried about those trees, because they wanted the last honey, ‘gudhe’ left on earth, and the mothers were upset because they could not give it to them, for the old clever men of the tribe, the Wuyan, would not let them touch Nguthungulli’s three sacred trees”. 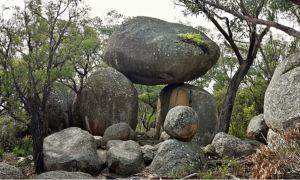 “Nguthungulli, the spirit who saw everything listened how the people longed for honey, flowers and the colours of the sunshine, yet they would not touch his trees, and Nguthungulli was pleased…….  He decided to reward the people and gift them a food as sweet as honey which they would love……soon white sugary specks appeared on the gum leaves and sweet juice began running down the tree trunks and hardening into lumps which the children could gather”…….

“The people were happier and their craving for sweet food was satisfied…….  But the wise old Wuyan were far from satisfied…….  They longed to see the flowers growing again, and to feel the warmth of the sun,  and so determined were they, that without telling the people of their tribes where they were going, they set out on a spiritual quest ‘ngudhal-gali’ to find Nguthungulli so they could ‘ngalawa’ which means seek him to ask  that Nguthungulli restore and seed the earth with the beautiful colours and sweetness of flowers once more” ………

“The Wuyan journeyed east until they came to the foot of the sacred Oobi Oobi mountain, towering so far above them that it’s top was lost in the dark clouds”…..

“Oobi Oobi is Nguthungulli’s sacred crystal mountain from the Dreamtime – a conglomerate of the five eastern volcanoes – the source of  refreshing life –  after a post cataclysmic impact event had created an ice age  ”….. 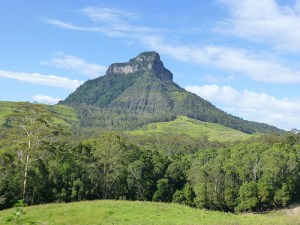 “At first the sides of Oobi Oobi seemed too steep to climb but eventually the three men found a foothold ‘wayal’ …and this word Wayal has two meanings, one is foothold and the other is Milkyway”……

So those Wuyan found a wayal,  then another and another until, looking up, they saw it was a path cut into the side of the mountain reaching as far as they could see….Up and up and up they went, climbing one day, two days, three days, through the dark cloud until at last on the fourth day, they reached the top, completely exhausted”.

“They looked around them and saw a spring of water from which they drank eagerly…at once their weariness left them……….  Suddenly they heard Coowarragum , a bull-roarer, the voice of the great  spirit, asking them why they had come”……

“They sang to the spirit ‘jingan’, a sacred song of sadness, of how barren the earth had become since Nguthungulli had left…….how the flowers had all died and had not bloomed again, and although they had the sweet tree juice in place of honey, they longed for the flowers to make the earth bright once more and they longed for the warmth of mother sun “Yelgun” to rise every morning and light the world”…….

“Nguthungulli was pleased with the song …..the wise old men, Wuyan, were lifted up through an opening in the clouds and set down beside Balun, the great river in the sky….flowing through a land of exquisite beauty with star burst flowers blooming everywhere, massed together in brilliant colours like hundreds of rainbow’s laid out on the desert plains………  The Wuyan were so overcome that they wept for joy. But they soon remembered why they were there and they gathered as many of the lovely blooms as their arms could hold……  When they were finished, the great spirit lifted them gently and flew them back down through the clouds  to earth onto the top of the sacred mountain Oobi Oobi”……

” a beautiful metaphor of celestial matter seeding this planet”

“Again they heard the spirit’s  voice saying, “Tell your people that the earth shall never be without flowers again……  Different winds, ‘burgiyn’will bring the flowers in every season and the east wind will bring them in profusion…… and there will be blossoms on every tree and shrub”.

“The Wuyan took the flowers that they had gathered and began to descend down the wayal – stone footholds-  then journeyed across the plains,  and over the stony ridges to the camps of the feathered serpents …the bird tribes, with their arms full of the precious flowers”…….

“The people flocked around them, overwhelmed at the spectacle of the Budharbihyn, flowers, and how they filled the air with their beautiful perfume……  When the Clevermenshared the promise made by Nguthungulli the bird tribes were so grateful that they each took some of the Budharbihyn and scattered the flowers seeds far and wide, over the tree-tops, over the plains and ridges and wherever they fell, they have grown ever since”.

“The place where they first scattered the flowers is called Girraween, which means place of the flowers……on the NSW Qld Border at the back of Main Range Volcano…and ever since this time the Origine’ people have scattered the seeds so as never to be without the gifts of the Sky Ancestors  and they watch the stars, so as to follow the cycles of change ”.

“And thereafter trees and shrubs have blossomed thickly again,  and in time the earth recovered from the devastation  ….The bird tribes lifted the clouds……‘Yelgun’, mother sun sailed across the blue skies once more and the earth was restored with abundant cool grasses and healing flowers as when Nguthungulli, our Father , the god of creation, had first walked upon it in the alcheringa”……..

“This Bootheram was published in the early 1960’s but at that time there was no recognition or understanding of the profound layers of the Origine’ Lore ….so much ancestral knowledge that we need to protect and learn – so that we can survive  “……

All Cultural and Intellectual Copyright [Moral Rights] of the Ngarakbal Githabul is protected under international lore….