On the east coast of Australia’s most easterly point are two ancient volcanoes…..The Tweed Volcano and the Focal Peak Volcano…… Green jewels in the crown of the UNESCO World Heritage listed Australian East Coast Gondwana Rainforest Reserves….A remnant sliver of lush emerald rainforest on one of the oldest, driest desert continents on this planet…

The Tweed and Focal Peak volcanoes are the ancestral homeland estates of two very ancient Origine tribes, who have been on this land ever since the ‘Alcheringa’ – which in their dialect translates as “the beginning”……And unlike many other Origine tribes lore’s of creation, which usually involve migration and arrival to the vast southern island, this particular lineage have a very different ancestry….with their tradition’s lore’s and custom’s descending from the Carpetsnake Clan lineages …arguable one of the most ancient lineages on earth…

The respective names of these two ancient tribes are the Ngarakbal and the Githabal, and they are actually not tribes, but Marriage Moieties… Their lore say’s they did not come here across the sea……They say they were always here…. since the Dreamtime…..and their creation lore’s say they were made here…by the Sky-Ancestors….way back in the Dreaming….

The term “Moiety” means half…and their marriage moiety kinship, or ‘Skin Lore’ system can be explained in this way…..

Ngarakbal are one half ….Githabal the other….and just as every human on this planet required a mother and a father to come into existence, so too the ancestral Ngarakbal Githabal marriage moieties follow this natural lore which flows down from the celestial realm…from the stars….so [naturally] their totemic kinship system operates in accordance with star cycles, which are indisputably the greatest calendar system governing our known reality.

Following the rhythmic pentagram star cycles of our universe, the Rainbow Serpent, Grandmother [All-Mother] and Seven Sisters traditions define and govern the Skin Lore’s, recording changes in environment and climate and providing priceless information in regards feast and famine…..increase and decrease…..Vital information that allows not only for survival of the moiety but also how to assist the surrounding natural biodiversity to thrive and survive solar cycles… 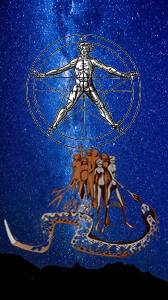 Totemic allocation defines each individual’s responsibilities within their respective ancestral estate….so that everyone learns to care for and increase their totem species for the greater good of the moiety members to share at harvest…..

Their Skin Lore system also defines correct marriage and, like any contract, the Skin marriage system facilitate seasonal reciprocal access rights to travel and harvest adjoining moieties ancestral estates….the marriage system also ensure optimal health of the moiety…by breeding out weakness – creating strong genetic bloodlines of mitochondrial DNA lineages which are arranged into totemic subgroups….each moiety having many totemic subgroups within its ancestral area….with no individuals of aligned subgroup ever being allowed to marry…over many generations this Skinlore system is effective in minimising birth defects and eradicating disease

To achieve this symbiotic harmony between people and environment requires very strict protocols…..again, all governed by the star cycles….and this is how the Origine culture survived for so long unbroken…

The Alcheringa is a physical place – the highest waterfall on the escarpment’s linking the two volcanoes….Water being the binary element of their Rainbow Serpent Lore….The Ngarakbal and Githabal call the Serpent, Warrazum, who created the land…nightly the creation journey can be read, just like a book, in the heavens above their volcano’s…travelling across the skies with the Grandmother [All-Mother], the Seven Sisters and the Grandfather and his son……with kangaroo’s and dogs, rivers and trees…..all travelling together.

Written in the stars and mirrored on the land….Feminine, masculine, negative, positive, above and below, the Ngarakbal Githabal moieties and their antediluvian culture elegantly defines the connections of all life on this planet through their Dreamtime lore’s of creation….For them humans are not the supreme species, but a branch on the tree of life in which all life is connected and mutually dependant…Starlore …gifted from the Sky Heroes……Linking everything through the waters…with all the creation deities displayed across the milky way….

Contemporary science [of 2016] can now show us that almost every element on earth was formed at the heart of a star; including water, and all life which developed from it…even us…The Ngarakbal and Githabal Dreamtime Lore explains exactly this in eloquent loveliness…..explaining super nova explosions that effect our earth- in metaphor….for the greatest expansion of life this planet has ever know was caused by stars…….these natural lore’s are facts of evolutionary creation….linking everything together in what anthropologists call Matristic Lore systems.

Matristic Lore systems recognise and revere both the masculine and the feminine of all life forms and the origins of all life from the stars ….The term Matristic describes nomadic tribes that lived and cultivated huge interlinked estates and moved together following seasonal migrations of herds, while at the same time harvesting established food forest landscapes of fruits, seeds, tubers, fish, birds and animals across these vast estates…..with access rights being governed by the marriage skin lore’s….

These annual migrations usually involves a travelling trinity….being a herd, followed by a tribe, being followed by dogs, or in some continents it was cats….in Australia this is Kangaroo herds, followed by the moieties, being followed by dingoes – travelling through forests of trees……in the America’s it was Bison, Indians and Coyotes travelling through forests …in Europe and Asia it was Reindeer and wolves travelling though forests…Africa and south America had the big cats instead of the dogs…..but this matristic patterning and the masculine, feminine, tree and [water] serpent icons associated with it can be identified in ancient cultures across the globe…and all pre-patriarchal, which is the law system we live under now.

Equality – Unity…naturally and harmoniously…..in accordance with celestial lore, recording and heralding cosmic creation events which mean life or death for our world…..And, as in the case of many global nations, Matristic lore cycles were also revered…with cosmic events remembered in magnificent temples and pyramids….or, as in Australia, the Living Land [which is created by the stars] was preserved much as the biblical Eden….naturally and unmolested….with djurebil [sacred sites] of significant geological  formations respected and their creation process sung…recounting the essence of how they were brought into being because of the forces of the planetary Sky Heroes….

When one is aware of the nuances within the Dreamtime’s Astrotheological principals,  of all life and form being created by the mythical SkyHeroes, one quickly understands that Origine cosmology is actually explaining the classic sciences in myth and metaphor…..Sciences like astronomy, hydrology, geology, physics, biology, astrophysics, etc., and how all life is created through the interaction of these natural lore principals….using universal concepts to do so – from a time before writing…..male, female, trees and serpents….from the Alcheringa…..which appear to have morphed into what we now know as the old testament bible stories – including  the Adam and Eve story…..with the most beautiful thing being that these Astrotheological deities can actually be seen in the celestial skies of the southern hemisphere…. known as the Eelemarni Dreaming – a bootheram about marriage lore deities Leho and Leva or Kumbarra and Burigan – these astotheological forms appear specifically above the most eastern land of the Australian continent, Byron Bay,  at Winter Solstice in the ancestral Origine estates of the Ngarakbal, and travel west across the sky into the estates of the Githabul…..depicting “a marriage made in heaven”…..this ancient lore was recorded in an award winning short film called “Eelemarni” by Lorraine Mafi Williams and featuring Githabal Elder , Mrs Millie Boyd

Since the systematic conquering of the ancient tribes of earth by patriarchal Rome, and the replacement of those cultures with biblical doctrine, which is the first book of Land Tenure Law,  the methodical elimination of Matristic Culture has been enacted all over the world…..Matristic knowledge once known to the whole planet literally slipped [back] below the horizon into the southern realm of the Grandmother leaving many metaphysical questions to secrets unanswered and ancient monuments un-deciphered..

The North, being unable to see to below the southern hemispheres Tropic of Capricorn slowly forgot about the SkyHeroes and the marriage [star] lore they enshrine….. Northern survivors fell into amnesia…their communal lands appropriated and claimed using biblical legislation – which are exactly the same land tenure laws global governments’ still use today.

Rome’s patriarchal legislation created the ‘Rule of Law’ regarding the tenure of the lands that were conquered and assimilated by Rome across the northern hemisphere…of which ancient Britain, Australia’s legislative ‘mother land’, was one…..

Basically the maxim of possession [of land and chattels] is awarded as “first in time, first in law” ….and seeing as no ‘first’ written law existed in those ancient times, Rome wrote one…. allowing lands to be acquired and retained by [stealthy] administration…. thereby overthrowing all indigenous tribal tenure everywhere… And anyone who resisted was eliminated..

1,800 years later when the first invasion missionaries enacting the Rule of Law tenure process over Australia arrived in the south, bringing the ‘truth’ to the ancient volcano moieties by ushering in their  exclusively patriarchal law system, they forced the people to renounce their language along with their Origine Astrotheology and its volcano cosmology and obey the [Roman] doctrines which had excised the All-mother and the sacred marriage between the masculine and feminine centuries before….. Those missionaries were delighted at how quickly the Origine people took on the word of God – Our Father who art in Heaven – Unlike the Origine peoples they were completely unaware that the tribal peoples could see his celestial form rise above the great southern island 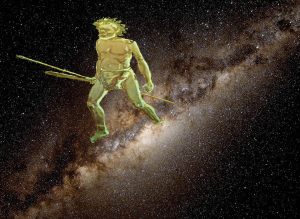 Today many denigrate the Origine peoples claiming they have denounced their own culture and replaced it with the bible….which the initiated in star lore know is not true…

That the Origine peoples can see the Astrotheological Sky Hero deities recorded in the old testament spiralling out of the south celestial pole – in annual cycles…. encompassing the full Matristic Lore which commences with the All-Mother, that Rome excised from the bible thousands of years ago,  travelling west with the All-Father to sink down in the heavens onto the oldest land on this planet ….3600 million year old Marble Bar in Western Australia ….geologically it is the first land to emerge from the sea – just as the old testament records in Genesis … The point being that they didn’t allow the missionaries to replace the Origine culture at all…they actually concurred…

The irony of all this being that contemporary patriarchal governance’s own common law maxim [derived from the bible] outlining  “right of possession”, being the first in order of time shall prevail, is perfectly preserved in the timelessness of Matristic Starlore for all the indigenous cultures of the earth…..For though Roman law can re-write a book, destroy a library, change the names on a map, or assimilate a tribe, it will never, ever, be able to erase the stars… they were there first…