Time itself is like a spiral…..For the Ngarakbal Githabal people of eastern Australia, Spirals have an important meaning in their Dreaming Lore , which they call Bootheram – It comes  from their ancestors; the Carpet-snake clans of the Feathered Serpent Traditions….and, their ancestral land itself is a gigantic geological spiral formation…an erosion caldera…

The Tweed caldera’s southerly point commences at Byron Bay and then arcs in a sweeping series of mountain ranges to its northern point, Currumbin, on the Gold Coast ….The Caldera has a series of inner rings, which spiral in to the central peak of Wollumbin…. 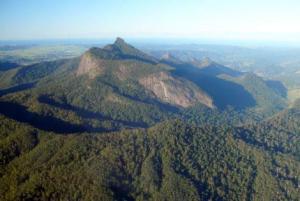 The Ngarakbal Githabal are the ancestral tribal peoples of this area….They have many Bootheram’s [Dreaming Lore] of their beautiful landscape and its history….In Aboriginal culture, Lore, Land and Language are connected….and the Bootheram must NEVER be changed…that is the LAW – Lore..

Bogangar, or Cabarita Beach is a coastal village of the Tweed Coast….The most prominent geological feature at Bogangar is its rugged Headland which has the geographical name of Norries Headland…Bogangar is the halfway point between Currumbin [on the southern Gold Coast] and Byron Bay, the most easterly point of the Australian mainland…..

The Ngarakbal Githabal ancestral name for Byron Bay is “Coorumbah”, and the northern point is Currumbin……Coorumbah – Currumbin… [Positive – Negative] …the village of Bogangar is halfway between them….

Bogangar has the largest coastal Lake in the Northern Rivers area….Cudgen Lake….fed from sea at Cudgen Headland, Kingscliff, 7km to the north along the beach….and Cudgen is Ngarakbal for ‘red ochre’ which occurs on the coastal ridges at Duranbah behind Kingscliff village

Now, Bogangar was the name of a little “hairy man”….a ‘Nimbinje’…These ancestral beings are prominent throughout the Bootheram Lore – they are from the Carpet-snake clans – from the Feathered Serpent Traditions of ancient Australia…Alcheringa…..In the distant past the ancestral people were Hairy…Now, this is by no means unusual, because ice-ages affect evolutionary changes and being Hairy in an ice-age is a very good thing… and the name of the ancestral tribe [family] at Bogangar were the “Bogangaree”……for Lore, Language and Land are linked, always…..

The Ngarakbal Githabal did not come to this land, they were always here…the Carpet-snake Clans were made here by the ancestors…In Lore the landscape and the sky are the storyboard or living library of all events….written into the landscape in ancestral language, in plain view for all to see, for all time….

As custodians of the land the Ngarakbal Githabal Bootheram ‘sings’ the story of their [specific] ancestral estate….Traditional Lore and Custom is that no-one else can sing in their lands….that is ancestral Lore for every ancestral ‘country’ all over the Australian continent – and for a very good reason…….It ensures that the Lore [of each specific ancestral estate] remains intact, unpolluted, uncorrupted and unchanged….each ancestral estate holds their specific portion of the song of their own land in their own language…and these ‘songs’ hold the survival knowledge of specific places throughout time…

In traditional Lore and Culture, someone from some other area can-not come into the ancestral estate of another tribal territory and ‘sing’ their story…Culturally if this happens the perpetrator is referred to as being “out of country”….It is perceived as very disrespectful – breaking Lore….for to sing “out of country” in a language foreign to the ancestral ‘djurebil’ [sacred site] potentially corrupts or contaminates the harmonic Lore of the Land…and this potential corruption threatens the survival of all.

“…At Norries Headland, on the sand dunes that connect the rocky headland to the mainland is an exposed midden consisting largely of “cart-rut” shells [Dicathais orbita]. A few kilometres north of Norries Head there was a stone arrangement on sandy ground in the rainforest, the stones being arranged in a spiral pattern about three metres in diameter. This report of the stone arrangement came from a man who worked on a sand-mining dredge, who collected the stones before the dredge moved over the site. Inland from Kingscliff is a ridge of red soil on which the village of Cudgen stands, the word Cudgen meaning red. According to report in 1900 “there is a hill at this place where the blacks get the red raddle or pigment to paint themselves when going fighting” …Steele – Aboriginal Pathways- page 48

Another, or perhaps the same, spiral of stones was reported to also have been found at Tyagarah just north of Byron Bay…as the story goes, these too, were found by a sand miner in 1965 and taken back to his home in Kingscliff…He then gave them to the Tweed Historical Society who networked with the Brunswick Progress Association and the stones were finally placed at the Brunswick Valley Heritage Park in 1989.

The convener of the Brunswick Valley Heritage Park was visited by Elders who told him the story of the spiral stones…This small extract was published in the Echo Newspaper in 1990……“In the dreamtime the north coast was populated by an ancestral people who owned the land….The Yowies…legendary mountain people in the style of the Yeti or Bigfoot came down from the mountains and drove the people off their land and dispersed them far and wide…..A male and female member of the people gathered them together again and then drove out the Yowies, regained their land and the sacred red ochre at a sacred site…. The stones are the spirals of the two people”……

You see, this all comes spiralling back to the Ngarakbal Githabal ‘Eelamarni’ Marriage Lore – from the Carpet-snake clans of the Feathered Serpent Traditions of Australia….which pre-dates the Three Brothers Lore thousands and thousands of years….The Three Brothers is the Bootheram of migrations into Ngarakbal Githabal lands that occurred after the last glacial maximum, when the ice melted and the sea levels rose…about 12,000 years ago – The Three Brothers migrated to the east coast of Australia with their families….landing at Yamba on the Clarence River….Now, the Ngarakbal Githabal were already here….and they call the Three Brothers “Paigal”, which loosely translated means human …The “Paigal” were cannibals….and there was a war at Nimbin Rocks …., you’ll find information about that in my past posts….But, the ancestral Carpet-snake Clans, well, they go way back…way, way, way, back…..and, explaining that, well,  that’s for another post

Anyway…. Here is another of the Ngarakbal Githabal Heroes…Mr Tom Close, relating the Eelamarni…from the ancestral Feathered Serpent Skin Lore.….Mr Close told this Bootheram in the 1950’s as part of the Civil Rights campaigns to recognise Aboriginal Peoples Human Rights…. Mr Tom Close was the half-brother of Charlotte Williams [nee Brown]…..’Beereen’ is the ancestral Ngarakbal name of Kingscliff, Cudgen Heads…

…”….In the Dreamtime there lived a young girl who was very beautiful. Her people were the Beereen tribe. At the time when this girl lived upon the earth there was a great war, for the Githerbul people were fighting against the Beereen people.

While the tribesmen were fighting the girl saw a handsome young Githerbul man who was a valiant warrior and tall in stature. She knew in her heart that she loved him, even though she had never seen him before. She longed that she might come to know him.

When the fighting between the Githerbul people and the Beereen people ended, a corroboree was held. When it was over the handsome young man returned to his uncle, for he lived with him in a mountain called Meeyanin.

The young girl of the Beereen tribe saw the footprints of the young man and knew by their appearance that he had gone from her sight.

Wherever the young man’s footprints led, there she walked. She had with her some bark of the boorlum or ti-tree, and on this bark she rested at night. Wherever the young girl lay down a ti-tree grew and to this day these trees can still be seen…’…..Tom Close – Ngarakbal Githabal

DAWNTIME…when all creation was created – there were also people of the Spirit World made. Now the name of the Good Spirit people is Wooyun. They are a kind of fairy people. You may behold these people for they look like ordinary mortals, but they are only seen for a little while…..

It happened that one day the fairy people were traveling down to Coogen Heads and with them was a lovely young fairy girl. Now this girl had been promised in marriage to a young man brave as he was handsome, for he was in charge of a Bora Ring – the sacred Ring – to where all young men must go for the initiation Ceremony so that they may be proclaimed men of their tribe. For a man to be placed in charge of a Bora Ring he must indeed be a good man, so all the people of the tribe many know that he is worthy to be placed in charge of the SACRED BORA Ring.

When the time had come that the young fairy woman had reached womanhood she thought of the man, the young man to whom she had been given in marriage when a child. The dawn had kissed many days and the stars had kissed many nights since she had seen him last. Then one day she saw him in at Coogen Heads – she knew he was the man to whom she was promised in marriage – for her heart told her so.

When the battle had been fought at Coogen Heads, the young man went to his home at Meeahan, which is the name by which Crown Mountain was known to the tribe of the young man. So the fairy woman set forth to seek her lover – she came to Meehaan, and the people of there told her “yes! the young man whom you seek and who will be your husband came home but is gone again”..So she set forth on her journey of seeking her husband, carrying with her the bark of the Ti-tree, she had brought with her from Coogen Heads….. Charlotte Williams [nee Brown] – Ngarakbal Githabal

…..Leo was a Balugan who was staying with his old uncle Miyarni. He would look after his uncle who was an old clever fella…….The Balugan said: “I’m going to have to leave you for a while. I am going over to the coast. I want to go down to the tribal battle”…the Uncle said “ don’t leave me on my own.” But Leo insisted he had to go.

The next morning the Balugan woke up early to leave. He told the uncle that there was plenty of gwiyam [possum] and honey and away he went. He went over towards the cost, camping on the way. The coast was where the fight was, it was lasting four days. There was a Guangun there where they were having the gunarra [fight]. A Guangun is a very attractive presentable woman with all the attributes of being beautiful. That Guangun saw the Balugan and she saw that he was handsome. She was feeling in her heart that she wanted to be with the Balugan……..She was a Ngarakwal woman and her name was Kumbarra…”…..

Today the site of the spiral stones  “north of Norries Headland”  is known as Casuarina Estate Kingscliff….The spiral stones ‘djurebil’ [sacred site] commemorated the end of the wars between the Ngarakbal and the Githabal….it celebrates LOVE and respect…..and its linked to the stars….but that’s another Bootheram

“The spiral is a spiritualized circle…In the spiral form, the circle, uncoiled, has ceased to be vicious; it has been set free”…Vladimir Nabokov…..