Mount Lindesay is the most significant sacred site of the Githabal people…the Githabal are the marriage clan of the Ngarakbal…these two ancient volcano clans are located on the most eastern point of the Australian continent, where the first light of magnetic ‘Mother Sun’ rises from the ocean and awakens the whole land……

The Ngarakbal and Githabal Bootheram [Dreaming lore] is inextricably interlinked….Bootheram tells of the creation of the land and all the inhabitants of the land….Plants and animal, fish and birds, everything has a Bootheram – and all Bootheram is interlinked…..its Native Science held in oral format and celebrated and related through song, dance and ceremony…Ancient truths held in metaphoric lore….Contemporary scientist’s and physicists would find correlation in disciplines such as morphogenetic’s, crystallography, biology, geology, and hydrology, to name but a [mere] few….the Githabal and Ngarakbal Bootheram is totally beautiful stuff…..and why wouldn’t it be….for they have grown along with this landscape throughout time and space.

I want to share with you a creation Bootheram about Mount Lindesay that was related to Phinney MacPherson [who managed to ensure to name a substantial portion of the landscape after himself when he surveyed it for the crown]…..Anyway, the important person in this is the Githabal Elder who he recorded this Bootheram from…it was a Mr Euston Williams…..Mr Williams was the husband of Charlotte Brown, a Ngarakbal woman from the Tweed Caldera…..Charlotte sang the Ngarakbal ‘portion’ of the Fairy Emu Dreaming [transcontinental songline] about her ancestral country and it’s central significant/sacred Mountain – Wollumbin……

Now, Euston and Charlotte were instrumental in the Civil Rights campaigns of the 1950’s….during those times the crown did not recognise Aboriginal people as being human, and had crudely ‘classified’ them under the Flora and Fauna legislations of the day….back then, one of the prerequisites for legally being a human being was to have an identified religion….So, Euston and Charlotte, along with many other Senior Elders agreed to start speaking & singing about their ‘religion’…they spoke their truth…Bootheram- LORE…and many other Senior Elders from their respective ancestral countries joined them right across the country…..collectively they campaigned for more than a decade [it’s an awesome story]….In 1967 after mounting pressure from the Australia public  the crown rescinded the flora and fauna classification and human rights were granted……the collective force of a positive campaign to speak their ancient truth produced a positive outcome….morphic field resonance…..Bootheram 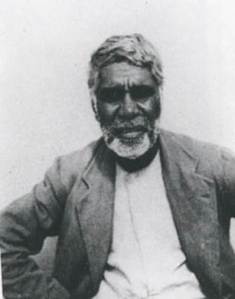 The Myth of the Mountain by Eustan Williams

….”Look at that mountain standing up, see how it goes straight up on it’s sides. No man can climb that mountain.  Look at it’s head, through the mist, covered with trees.  I worked as a chainman to Phinney MacPherson, the surveyor, right along this range and, when we come to Jalgumbun, he says to me, “Now Eustan, let me see them steps you say are cut out in this mountain”.  And I pointed out them steps. He stood there, writing in his notebook the story of the mountain that I told him“A man went after honey in that tree. He climbed up with the vine-rope round himself and round the tree. And as he climbed he cut footholds with his stone axe.  And his wives were waiting in the forest down below.

“Where are you?”, they called out.  And he called back, “I’m chopping out the honey”.  At last he called out, “”Here it is” and rolled the piece of wood with all the honey in it down to the butt and big roots of the tree.  They sat down in that camp and ate that honey and travelled then away along the range.

………………That mountain Jalgumbun was once a tree”. 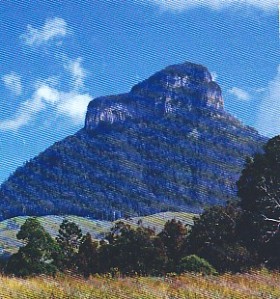 .And in the morning when they woke they saw the mountain that was never there before. Jalgumbun, standing up against the sky.

Well there’s a tree called Jalgumbun that grows here in the ranges.  It has real soft skin.  The fellas from the mill at Urbenville come with their axes, tractors and their gear, and fell and lop them trees and drag them out from the ranges of their native home….”………

Beautiful stuff Bootheram….It has many layers….and the strength of these beautiful people to keep their traditional lore and custom aflame is an inspiration….