The Ngarakbal hold the first portion of one of the important Transcontinental Bootheram Lore’s [Dreaming]…as above so below, it is written in the stars for the Lore to travel on the land through the peoples songs, hence, Songline…… and each tribal cultural block hold their portion of the ‘song’ as It travels across the land….following the stars….ironically it was the same stars that the British followed to Australia.
Land and language [dialect or linguistics] are linked…and the name of the clans who hold portions of the ‘song’ is the same name as their dialect…and as the song travels it changes dialect, passing through each ancestral clan Estate….Lore must always be sung in sequence…..just as one cannot fully understand a play from only half way through the plot…neither can one understand the lore unless it commences at the beginning….

For the Ngarakbal their central sacred site, Yar Birrain/Mt Warning/Wollumbin has many names….it depends on which Bootheram Lore is being related as to which name is used, and the level of the listeners learning.

In historical Bootheram’s each time-frame, or epoch, has a Creator Being …a totem who embodies that time and place…When the Wollumbin volcano was part of the deep ocean it had the totem of the Tiger Shark – and a specific name for that creation ancestor….And as it was ‘sung’ from the waters by the ancestor spirits [skybeings/starlore] the totems change to represent the next timeframe/epoch……The totemic creator spirit changes with every epoch.

One of the ancestor creator spirits was a Turkey….and he also has a Bootheram for his own epoch…The Turkey’s name was Wollumbin…the Tweed Caldera is the best example of an erosion caldera on the planet….Wollumbin Volcano Bootheram of the Turkey and the language of that song is in Galibal dialect…The Galibal were a tribe within the Ngarakbal area…….Gallibal is the sound of a Turkey, and the name of the tribe who hold his Bootheram….they referred to the entire caldera as a turkeys nest..Wollumbini momoli …

The central plug of the Caldera was named Mt Warning by Captain James Cook when he ‘discovered’ and charted the [so-called] unclaimed east coast for the crown in 1770, but for the Ngarakbal Githabul it has always been called Yar-Birrain

Recently the central plug has had the dual-name of Wollumbin applied and recognised by the Geographical Name Board – who control all global mapping.

They have gazetted the central plug alone, instead of to the whole Volcano that Wollumbin [the creator spirit] manifested way back in the dreamtime. As a result of this gazettal the ancient lore has been obscured,  because Wollumbin has also been incorrectly attributed to the dialect called Bundjalung…. Administrative bungle by government?….or is it a deliberate move to rewrite history to their advantage so that native title can not be achieved ? 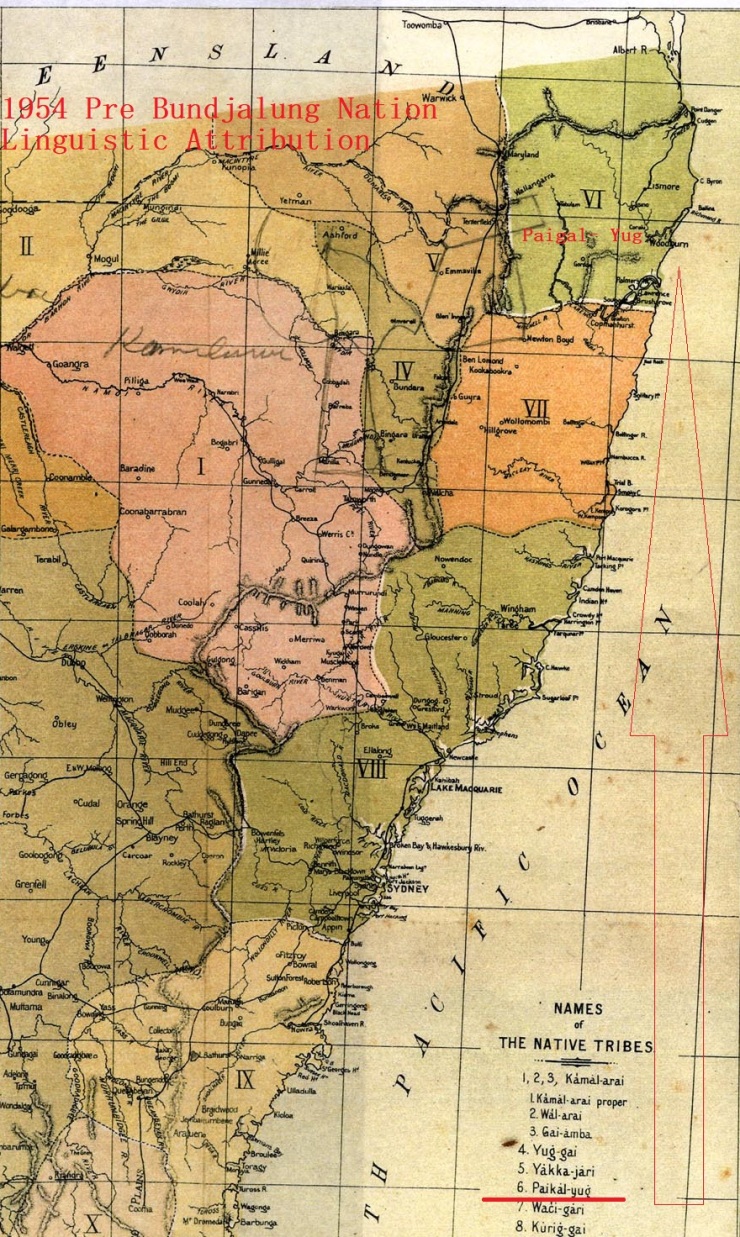 The following excerpt from a publication by Rev. Livingstone from  1892 more or lesssummaries the legend of the Three Brothers – a migration myth now being claimed [by government] as a Bundjalung Nation patriarchal lore …but in the original recording there was already a woman on the land …matristic
Lore metaphor for the Ngarakbal Githabul……

….“Long ago Beerung, with his two brothers Mommon and Yaburong came to this land. They came with their wives and children in a great canoe, from an island across the sea. As they came near shore a woman on the land made a song that raised a storm which broke the canoe in pieces….this is how the paigal [men] came to this land…”… Rev. Livingstone in 1892
The Ngarakbal Githabul Lore, as the ancestral Yoocum Yoocum moiety, is the ancient matristic lore of this local landscape – the original lore from the DREAAMTIME , which PREDATES the arrival of the Paigal by many millennia …And it is the Paigal whom oral history relates was a cannibal tribe of migrating refugees – a Patriarchal society fleeing from an ancient global war…

Today, the Australian  government has mixed the two separate systems together, but exclusively endorsing the patriarchal,  and deliberately eliminating the Matristic….

It is Noteworthy that Livingstone despite having resided in the Richmond area for 10 years does not identify the greater dialect area as being attributable to a group known as BUNDJALUNG…..nor does Radcliffe Brown…..nor does Metson……..Bundjalung didnt exist back then

This ‘administrative lands data was created because the first Police Administrators, who also managed the Aboriginal Protections Boards [which is a nice administrative way of referring to slave camps] in the late 1800’s were ordered to collect the languages of the Aboriginal peoples….and they originally collected and classified an entire region of Northern New South Wales as Paigal-YUG ….which is the name the Reverend recorded of the moiety/cultural block of the Yoocum Yoocum survivors and the Paigal survivors  now mixed together AFTER colonial British invasion….

For a hundred years the two cultures have been homogenized together by the colonialists…..and it was not until the civil rights campaigns of the 1950s , granting legal rights to the original people , that the government commenced rewriting the history and lands records……now classifying the same ancestral  Yoocum Yoocum region as Bundjalung Nation – a made up government administration title …effectively wiping out an entire matristic culture ….

Interestingly, Bungil-lung  is also part of  the ‘Lung’ Lore – another songline which travels up from the South Gippsland of Victoria along the east coast…. and it also travels into the centre of the continent – Uluru and the Arrente people where Bungalung is refering to cannibals.

Anyway, the original name of the cultural block that the Ngarakbal and Githabal come from was the Yoocum Yoocum….but that fact had been stealthily buried as part and parcel of the conquering and claiming of the east coast of Australia – and as we all know, rewriting history to the benefit of the conquerors is the classic pattern that has occurred all over the planet…Cultural genocide essentially…..and there have been many wars written out of the historical records…including the fact that only the east coast of Australia was claimed by the Crown, because the other four fifths had been claimed by the Dutch….and these facts have also been conveniently obliterated from the contemporary records of today since the Boer War – British v’s the Dutch – The British ousted the Dutch and their defeat allowed for the Crown to claim the rest of the Australian continent and commemorate it by calling the most western lands the Kimberley  As you can see on this pre- Cook map of New Holland , below….the east coast had not been charted, and therefore not claimed according to Northern Hemispheres laws of tenure. 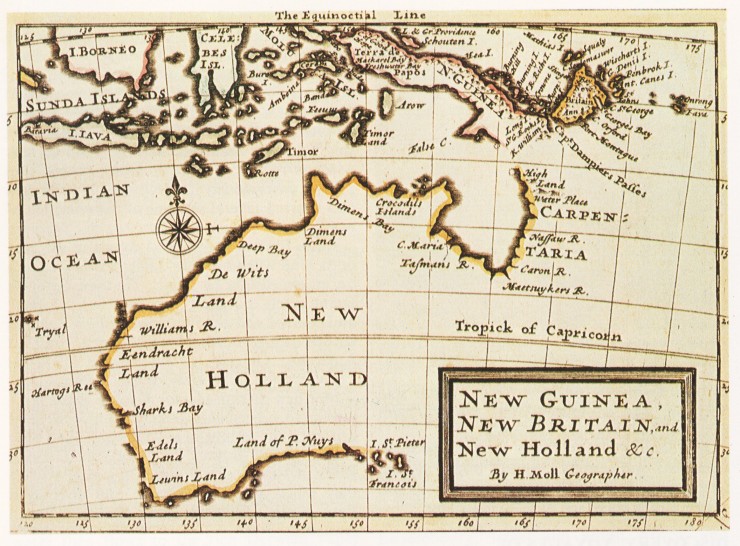 Anyway, back to the east coast history…..

Joshua Bray, the first Tweed/Byron Shires Police Magistrate collected the Ngarakbal’s linguistic records in the late 1800’s under orders from the crown who were busy fighting the Dutch at the time…

These Police records of Joshua Brays Ngarakbal language were submitted as evidence to alter the gazettal of the name of Mt Warning to Wollumbin in the mid 2000’s – as part of the contemporary governments Reconciliation process of dual naming significant sites – Though government was recognising the Aboriginal significance of ancestral sites it was, at the same time, stealthily changing the ancestral attributions from the original truth [lore, land and language of the Yoocum Yoocum] to the administrative records of the Police [Bundjalung]….wiping out Yoocum Yoocum completely from the Lands records….

This is achieved by rewriting important cultural references ….such as Anthropologist Radcliffe-Brown, who refers to this same cultural bloc as the Yukum or Yukumbil tribe; …………   covering a vast area of the ORIGINAL Moreton Bay – from the sunshine Coast to the Richmond River ….whoops, too many people have been clicking on that so the gov took it down ….so try this link of a similar 1842 map

..Kidjabal was Radcliffe Browns way of recording the tribal dialect of Githabal….many and various versions of spellings occur throughout the records….here is what he had to say about the Githabal and Ngarakbal peoples…..

“This large tribe, named in it’s negative [yukum = No] occupying the region of the Richmond and Clarence Rivers in the north of NSW and extending over the Qld Border. Their country extends about 100 miles north and south and about 80 miles east and west.  Within the north there are considerable local differences of dialect, and a number of the sub-tribes are recognised.  The sub-tribe about which I have most information is the Kidjabal of the country at the head of the Clarence River “…Radcliffe Brown 1929A:400

And then there was Archibald Metson. He was, at one point in his career, he was the Administrator of the Aboriginal Protection Board….This was a Police/Crown administrated board that  governed all the Aboriginal Missions and Labour farms….one of their requirements was to collect the tribal languages for the crown, just like Joshua Bray had gotten his corporals to do …. but Metson had recorded the truth

“All the Tribes from Nerang to the Clarence spoke variations of the great “Yoocum-Yoocum” dialect [Yoocumbah],  which went west to New England and down to the head of the Condamine at Warwick,  where it joined the Wacca-Wacca of the Darling Downs”…Metson 1894

The “Yoocum-Yoocum dialect which extended from the Logan River south to midway between the Clarence and the Belinger River, and all New England from Armidale to near Warwick, whence it was joined by the Wacca-Wacca of the Darling Downs,  the dialect which came down the north side of the Brisbane River to the sea and Toorbul Point and down the Burnett to the sea at Bundaberg”..Metson 1923

“On Nerang Creek at that time [1869-70] was a Tweed river blackfellow called Tulaman, afterwards killed in a myall row where bad rum played a leading part in the programme….Tullman was my sole companion in a ten days’ tour on the MacPherson Range. He belonged to the Brunswick “Minyahgo-Wallo”, who extended from the Nerang to the “Amburra” blacks on the Richmond and the “Wadjie Wadjie” tribe of the Clarence”..Metson

And then there was the Rev. Hugh Livingstone, a Presbyterian minister who resided in the Richmond District for Ten years between 1876 and 1886 [Rowland et al 2001]  In 1892 Livingstone published a paper entitled

‘A short grammar and vocabulary of the dialect spoken by the Minyug [Minyung] people on the North East Coast of NSW’.  The contents of this paper are generally well known, and have been extensively quoted and cited in the literature [ see for example Sharpe 1985,  Steels 1983, Crowley 1978].  According to Livingstone, the people occupying the Byron-Brunswick area spoke ‘Minyug’,  [that is the people who say minyug for what?],  one of a number of dialects of an unnamed language that was spoken over a large area from the Clarence River in NSW to the Albert River in Qld [Mckeown2007;  Curr1877]

For Classic Invasion rationalisation, after collecting the data on the Origine’Tribes,  this specific east coast location was strategically chosen as the state borders of New South Wales and Queensland  by the Commonwealth forefathers to effectively ‘divide and conquer’ the Yoocum-Yoocum Aboriginal moiety – through administration’– deftly eradicating their old world lore’ by drawing a line on a map where no line had ever been before ……Right through the very beginning of the Rainbow Serpent Culture of Australia…effectively crushing the head of the serpent, and creating a domino effect dispersing the matristic Skinlore, Kinships and ‘connections-to-country’ right the way across the continent with one killer blow.

This administrative sleight of hand trick is a dual naming process  to thwart proof of ancestral connection to country , and these alterations then travel through the department hierarchy all the way up to the UN, and thus, the U.N Geographical Names Board now endorse the bogus historical referencing.

Ancestral names on the maps have been sanitised and reclassified to empower only governmental lands councils, which are not representative of ancestral moieties, and  the ability for Aboriginal Native Title claimants to prove pre-colonial title of their own country has been thwarted……any attempt for the ancestral peoples to appeal to the United Nations for assistance has been deftly blocked inside the records …….