Is Dual Naming really reconciliation or is it just the government Claiming By Renaming Aboriginal Sites?

Their ancient language identifies the names of their totemic ancestral creator spirits…it defines the names of  their ‘Skinlore’s…ít hold their sacred names from their Bootheram [Dreaming Lores] …Lore, Language and Land are linked…and must never be changed…..it is sacred LORE….and it is also Biblical Law   which was a convenient way for the crown to claim the great southern continent in the name of  GOD for their KING.

“The Birds gave us our language….. We are the Bird Tribes”….Marlene Boyd – a Ngarakbal Githabul Elder taught me….We didnt come to this land in a canoe.  We were always here.  We were made here.  We are the old people…….before the flood”….

“other tribes from other places came here many times….many times,  long before Captain Cook, she told me……and she was right…..the Portuguese, the Dutch, the Egyptians, the Islanders…..many tribes had been her before the British”

We all know that the “Alteration of Traditional Lore” by invading governance has occurred globally….like in Africa ….or Japan….and Europe.…etc etc….. Conquerors kill off knowledge holders [seen as adult threats] and then they commence destroying maps, libraries and all records of the native adults that could re-surface to be used in later times as evidence to shows prior tenure of lands….The pattern usually goes on to appropriate the cultural ‘temples’ of the invaded nation, enslave adult survivors and commence reprogramming the ‘orphaned’ children to forget their ancestral heritage and become compliant slaves….We can trace this pattern in the dissemination and subsequent

assimilation [or abrogation] of ancient global lore’s….much of it can be identified in the biblical texts….and it is from the biblical texts that the legal instruments regarding Laws of Land and Title to Land have been developed….Laws that ‘validate’ tenure, and conveniently absolve the souls of those who commit the dirty deeds….

A further process of classic ‘divide and conquer’ tactics is to outlaw the use of ancestral language and replace it with the language of the conqueror – by indoctrinating the child survivors….and this too is part of ‘validating’ tenure….for Lore Land and Language are linked…So, as each ancestral land and culture are ‘claimed’ and the conquered either killed or enslaved,  the conquerors then busy themselves in rewriting cartographic records [maps] –  renaming places and obliterating languages associated with specific locations of the original people – they do this as quickly as they can….These processes I refer to as being ‘geospatial alterations’ ….and this type of modus operando process can be traced all the way back to over 300BC – with the groundwork for the Roman invasion of Egypt…SO…WHEN MABO ACHIEVED NATIVE TITLE IN 1992 THE AUSTRALIAN GOVERNMENT FREAKED …….It had to do something quickly, or it would loose tenure of the remaining crown properties …..and so it created DUAL NAMING and claimed it was an act of Reconciliation…..nothing could be further from the truth….

Claiming by Renaming is a classic way to wipe out one history and replace it with another …and do so in the name of GOD ..

The gullible believe that Dual Naming significant aboriginal sites sounds like a brilliant act of Reconciliation – all ethical and honoring –  meanwhile, inside the paperwork, the original dialect attribution is being altered – with the new administrative labels of Aboriginal Lands Councils  attributed with the ownership of the lands instead of the ancestral tribes …they even have their own cadastral databases

Contemporary Academics have happily assisted the creation of these cadastral databases for Aboriginal Lands Councils so that they can claim Crown Land all over Australia….by using academics and government department to assist in the mapping of ancestral sites ….and then doing deals with corporate banks to develop those same claimed lands through the abuse of Aboriginal Lands Council Legislations……Dual Naming and altering the lands records to empower these purpose made Aboriginal Nations is happening everywhere…..But it doesn’t help real bloodline Traditional Owners on bit….in fact , it dispossesses them….

In the Tweed Byron Area on the east coast of Australia  this pattern has occurred through stealthily replacing the original lands records attributions [collected by the native police at the time of invasion from the ancestral tribes – the Ngarakbal and Githabul peoples] and now with the help of the Academics they are reclassifying them all into an administrative dialect which the government call the ‘Bundjalung Nation’… when culturally Bandjalang [proper] was a tribal clan of the Widgibil from  south of the Wollumbin Caldera…….. hence the Bundjalung National Park …

It is of note that there is NO Evidence within the early Ethno-historical records  to support the contemporary governance concept of a cultural bloc now promoted as ‘BUNDJALUNG NATION’ being associated with this area of Australia,  or of a Tribal group known as the BUNDJALUNG ever having any access or ‘rights’ to either the Ngarakbal or it’s marriage clan the Githabal Tribal Estates.

The incorrect placement of the Ngarakbal and Githabul and their associated clans has caused much unneeded confusion, frustration and suffering within the communities…but it has a foundation of political law that was used to claim the Continent of Australia…and its all to do with the names of places on our Maps

This commenced when Major Thomas Mitchell the first Surveyor General of NSW, under orders from the Crown to establish a claim of proprietorship over the then most distance and elusive parts of the continent was ordered to do on land what Captain James Cook had done from the sea…to go out and map and NAME all the major geographical features…

Mapping and naming were the prerequisite functions, before the action of tilling the soil, for the British to legally claim this continent. And so Mitchell went out to map and name and thus takes legal possession of the continent of Australia. The crown gave explicate orders for the Aboriginal names to be used…it did this for the very important legal reason of establishing TENURE over Terra Nullus, the unclaimed east coast of New Holland, as Australia was then known.

As Mitchell stated…..“The great convenience in using native names is obvious…so long as any of the Aborigines can be found in the neighbourhood…future travellers may verify my map.  Whereas new names are of no use in this respect…..”…..

Now all this renaming was done to dispossess any prior claims over Australia…and those lands records [maps] were all fine and dandy for the crown to maintain UNTIL MABO achieved native title….then, the maps recording the original dialects became the evidence ancestral people needed to prove their connection to country ……..So since that time the government has stealthily worked on renaming and altering the dialects in the lands records database and seeding it in administration all the way up to the UN geographical databases …..so that the maps don’t reveal the real Ancestral Owners…and theses same newly altered maps are used by Native Title Services  which makes it very easy to stop any ancestral moiety from successfully achieving Native Title …..

Altering Maps so as to claim land is a classic practice of post war administration….Conquer a country and wipe out their lands records….it’s happened all over the planet…..….and, unfortunately, it’s happening still….

Australian government bureaucrats, like former  NSW surveyor-general, Warrick Watkin used his many positions of power, including the board of ANZLIC and as envoy for Australia to the UN Geographical Board using Australian citizens funding and promoting Reconciliation Australia to encourage dual naming of Australian geographical place names as a purported act of honouring and reconciliation of Origine’ peoples…like in the dual naming of Mt Warning where the geographical names board and the Aboriginal Lands Councils removed the Name Wollumbin off an existing mountain, to the north of Mt Warning, and then transporting to the central peak to re-claim it as a Bundjalung Nation sacred site………………All the while this process only served to dispossess the true origine’ peoples from the very evidence they needed to achieve their Native Title ….the original Lands Records…..and those records get seeded all the way up –  polluting the entire world geographical governance systems…..

Ironically, his same alteration of the language attributions on the Lands Records currently appears to be also dispossessing the British [Crown] tenure of Australia; with the Australian corporate government ab-using the Aboriginal Lands Council Legislation’s [which government purposefully created as an alternative council system – one which doesn’t have to publicly disclose its administration] to systematically claim and then sell off the crown properties;….this abuse of Aboriginal Legislation effectively serves to further dispossess the ancestral Origine’ moieties by using the Aboriginal Lands Councils systems against them in much the same process as the Native Police was used before….. 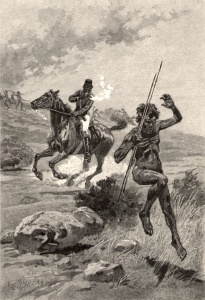 To hasten this claim to legal proprietorship of the continent the crown and the parliament gave the order for the Native Police Magistrates to collect the language and names of the sites in the region…the Native Police had been sent to operate in the Tweed and Woodenbong cross border regions from 1849….for 30 years, until 1879, the Native Police had one order…to disperse the Aboriginals, for the coming of the pioneer settler and enforce the proprietorship of the crown over the gold fields. ..So that is exactly what they did….

The first aboriginals who resided with Tweed’s first settlers, Bray and Gray,  were the native police trackers and the women whom they had been ”awarded” for their efforts of dispersing the local ab-Origine’ moieties.  Those first police were brought up to the Tweed from the Bray and Gray properties in Tumut Brungle in the south …..many of their descendants have remained here in the Tweed.

For more information on Matristic Starlore please visit my blog  ……….. And if you would like to receive more of my posts then subscribe [its free] and they will be emailed to you direct…. Hoo Roo