The Ngarakbal [Nganduwal] and its marriage clan the Githabul are the Eastern bloc of the ‘Yoocum – Yoocum’ dialect Moiety Group – …. Their ancestral territory spans from Byron Bay to Nerang [Ngarang] and takes in the full sweep of the Wollumbin caldera ….they are ancient Carpet Snake Clans of the Rainbow Serpent Fertility Cult-  the Traditional Owner Custodians of the Wollumbin Volcano which includes the iconic Mt Warning that Captain James Cook named in 1770. 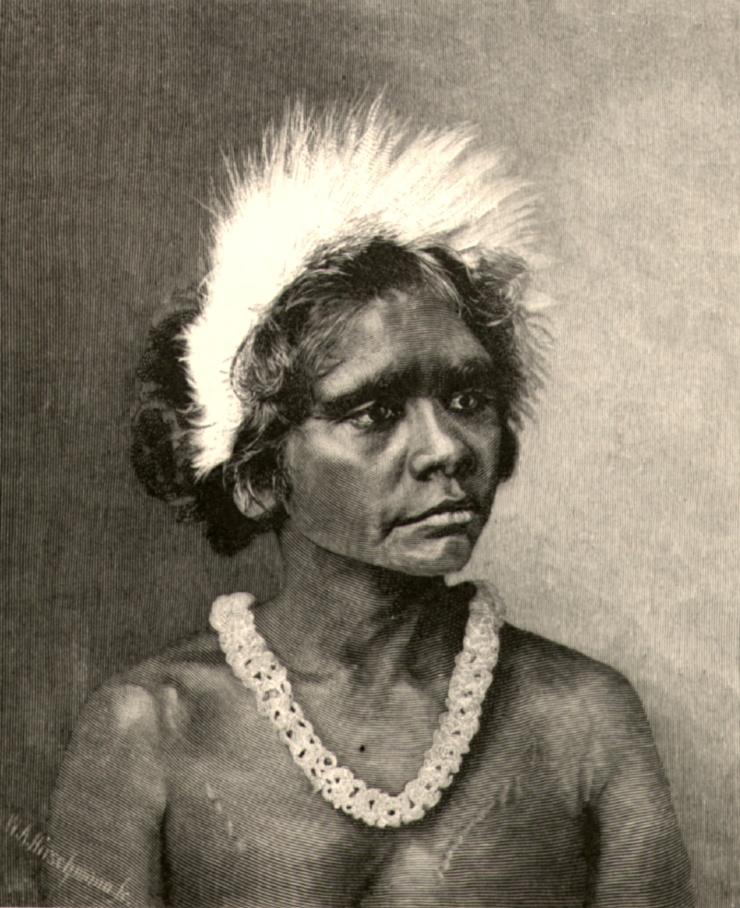 To the Ngarakbal & Githabal people their central mountain Wollumbin has many totemic names.  As the central significant mythological site within their Ancestral ESTATE their entire totemic matristic lore revolves around this sacred place, but at the same time this lore travels – following the path of the creator spirits across the continent …..these pathways are part of their Starlore – an ancient tradition of the Grandmother Rainbow Serpent Seven Sisters Skinlore culture

A Moiety is an anthropological term to describe a cultural block of four to twelve ancestral marriage groups from a greater matrix of interconnected structures that make up the kinships and skin lore associations of semi-nomadic societies ….Males remain within their ancestral area of  birth throughout their life, but the women marry into the opposite group – and this “opposite” marriage clan cycles [every three generations]  so as to avoid birth defects and health afflictions associated with interbreeding  ….…this ancient system of matrilineal marriage lore – SKIN LORE – ensures the health, strength and purity of the ‘bloodlines’ of  it’s people….and this is why marriage lore is so strictly adhered too.

Matristic is one of the planets oldest and most sustainable forms of social structure , sometimes referred to as pre-historic , it is in no way backwards …Mary Mackay PhD describes it as  “Patriarchy is men in charge, matriarchy would be women in charge . . . Matristic is a more collaborative, partnership, a communal way of governing. It’s a way in which the Earth is seen as a great mother that brings forth life and is worshipped for that, but at the same time it’s not a society in which women exercise over men the same kind of power that you would have in a patriarchal society that men would exercise over women. It’s a gentler term. It’s a more egalitarian term.”

Anthropologist Radcliffe -Brown identified the Yoocum Yoocum as – “This large tribe, named in it’s negative [yukum = No] occupying the region of the Richmond and Clarence Rivers in the north of NSW and extending over the Qld Border. Their country extends about 100 miles north and south and about 80 miles east and west.  Within the north there are considerable local differences of dialect, and a number of the sub-tribes are recognised.  The sub-tribe about which I have most information is the Kidjabal of the country at the head of the Clarence River “…Radcliffe Brown 1929A:400…

In the words of Archibald Metson Cheif Protector of Aborigines “the most extensive dialect in Australia not even excepting the ‘Kamilroi’ and ‘Wirradjerie”….. Geologically this region is known as the Clarence Moreton Basin, and through it flows the fresh waters of Alcheringa Waterfall to merge and mingle with the saltwater’s surrounding Alcheringa Island…

Yugambeh[Jukambe]  the Northwest, around Ipswich and as far south as Canungra and Beadesert and east as far as Oxley

The opposing directions, North, South, East and West make up the two  marriage clan’s within the traditional totemic ‘Skin’ groups…..Ngarakbal and Githabal….and,  Yugambeh and Widjabal.

This Skin system provides a sort of short hand reference to the complex system of kinship and marriage and the appropriate behaviour for certain categories of kin.  A person is born into their Skin group and thus in addition to a personal name, shares with other relatives who are similarly classified, a ‘skin’ name

The Ngarakbal and Githabal draw on their intimate knowledge of family, personal life history, ceremonial status and relation to land…..In order to understand the different sorts of ties one needs to understand the kinship relations to each other and country

Thus, this Kinship Lore & descent system of the totemic ‘Skin’ lore which governs their lives is also the same system that connects them to their ancestral country…and it permeates through their cultural ritual roles of increase or fertility under the Lore’s of the Feathered Serpent Moieties …Matrilineal ….RAINBOW SERPENT LORE….. 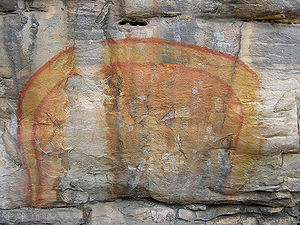 The Rainbow Serpent is a most important Ancestral Being within the Yoocum Yoocum and associated aligned moieties across Australia…It governs every facet of their ‘Skin’ Marriage Lore’s of Creation and Fertility – the spiral of Birth, Death and Rebirth….Their Central Spirituality governing the ‘Cycles of all Life’…The Rainbow Serpent is intrinsically interwoven with the ‘Skin’ Marriage Lore of the Seven Sisters – Arguably the oldest Religion on the Planet…

The Lore’s begin with landscape creator journeys from the coast of the Wollumbin Caldera – the most easterly point of the ancient Australian continent – and the Lores come from the ‘Alcheringa’….This word – ‘Alcheringa’, and the Rainbow Serpent Lore, and the Seven Sisters, feature in the regional dialects of other ancestral estates across the continent….but, these traditions are not in every Aboriginal culture….Some have been replaced due to ancient invasions and wars of the distant past – They have different beliefs – creators, ancestors and cultural values – the same as different religions have spread around the planet throughout time….

The Alcheringa [Lore] once travelled right across Australia…It has been recorded as part of ‘skin’ marriage lore in several ancestral regions, including the eastern cultural blocks of the Wakka Wakka, the Gubbi Gubbi, the central New South Wales Komilaroi, and also the Urabunna and Arunta peoples in the red centre of the continent…There are also regions of the west coast moieties in the Pilbara – but the Alcheringa is certainly not limited to just these…as with all ancestral Lore, within each specific ancestral estate and with each ones specific language, the sacred sites to commemorate the ancestors creation journey are maintained and utilised by the ‘custodial’ clans…joining the creation ‘songs’ together, much like pearls on a necklace, makes the ‘songline’….and many of these ‘songlines’ are governed by celestial bodies – the transits of stars.

The east coast in Ngarakbal Githabal country is the beginning of the Alcheringa – marked by a ‘djurebil’ [sacred site] that is located high in the rainforest mountains, in the aquifer watershed of the two east coast volcano’s…This djurebil [sacred site] was created by the Carpet Snake Clan ancestors….the Carpet-snake clans are the oldest clan on the continent…the ancient ones….

The Alcheringa creation ‘songline’ travels from ancient geological sites now submerged beneath the waves of the eastern Pacific Ocean – from the distant past when the sea water was locked in ice and the land extended out much farther than it does today ….but the djurebil remains…and weaves to the west – as serpents do…it is the pathway of the Rainbow Serpent ancestor, making the water paths within the geological features as it travels….

Rainforest ridges, Mountains in their own right, once named ‘little’ and ‘big’ Buggram [Bootheram] are divided by a deep gorge that the Rainbow Serpent gouged on its journey…after creating Little and Big Bootheram it travels up – higher than Wollumbin [Mount Warning] – higher than Julgumboong [Mount Lindsay]…it creates a great Plateau “Dhungura-ngarian”, which the white man named Lamington Plateau and traveling on to Mount Worendo, where it creates a series of waterfall cascades that plunge down through the rainforest…it is there, high in the remote rugged Macpherson Ranges, of the Caldera’s rim that the highest waterfall is created…and it’s djuriebil name is ‘Alcheringa’….and it is the name of that waterfall still….

The Ancestral totemic ‘beings’ not only created the geological features and aquifer systems of the continent, but also carried and distributed objects which were the sources of ritual and tribal Lore as well as the sources of all forms of life, including the people themselves….

“Before it was named the Border Ranges National Park , the same forest was known to the Origine’ peoples as Wiangarie , which means SEVEN SISTERS in Ngarakbul Githabul dialect….and the Pinnacle Hill, or ‘Coowarragum’, is one of our most sacred creation djurebilsites of these rites”…

“Tribes would travel from all over the ancestral estates to attend star ceremonies at the Coowarragum Lore Ring ‘complex’ to celebrate marriage, seasonal harvest, the elements and the Sky Ancestor spirits ………and, when the time was right, it was also a centre  for initiates, male and female,  to attend their ‘Nyirgi’ training for initiation through the First Rule; and ‘Magihyn‘ – second level initiation lore”……..

” The Wiangaree forest became the Border Ranges National Park in 1982 .. included on the World Heritage list as part of the Central Eastern Rainforest Reserves of Australia,  along with many other major rainforest stands in the north-east N.S.W and south-east Queensland cross border region”…….. 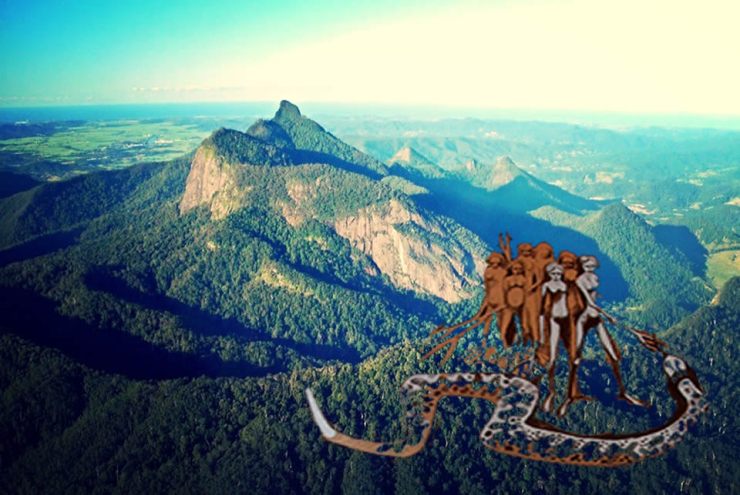 “Though the Border Ranges has been acknowledged as being a portion of the Githabul ancestral estate, through the process of Native Title, it still has never had its ancient sacredness recognised and restored ……and only joint managements rights were given to the Githabul, not full tenure, as they had sort……the Yoocum Yoocum ancestral estates djurebil sites still remain [deliberately] severed either side of the state border”…..

What better way to deliberately destroy a culture , than to literally cut it in two…..

With all the skinlore sites divided ancestral lineages could be pulled apart …or so they thought ……for though they can carve the land , they can never change the stars from which it descends …. 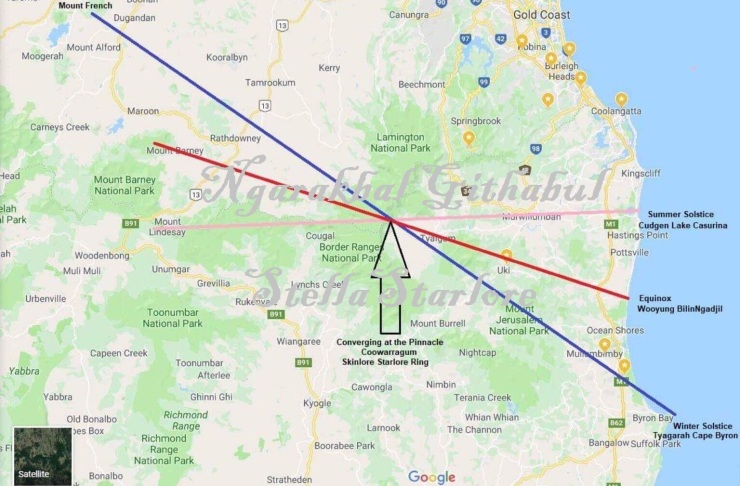 For more information on Matristic Starlore please visit my blog ……….. And if you would like to receive more of my posts then join my newsletter [its free] and they will be emailed to you direct…. Hoo Roo